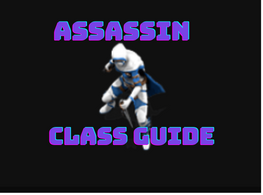 The Assassin is a flexible DPS class with many different build variations and playstyles.

Want to dive into the enemy backline and come out unharmed? Go ahead.

Want exceptional peels for your teammate? Go ahead.

Terminology used in this guide

Hardcast = Spells that have a cast time and aren’t instant

Gap closer = Ability that lets you come close to an enemy. Teleport/Movement Speed for instance.

Generates energy and combo points. Use in the beginning of the match to quickly get 5 combo points available. This sets you up to open with different combo attacks.

Stealth can also be used to avoid spells. If stealth is cast at the last few seconds of a DoT attack, or as a meteor is coming in, you become immune to their effects.

Another great thing about Stealth is that it allows you to set the pace of the game. Make sure you dont have any dots on you and you aren’t being focused at the time of pressing it. Let your teammates know if you’re going to reset so they have time to back out or start using meditate.

Great AoE attack that you can use for damage, peel or fleeing. You effectively slow the enemies you hit and also apply dot damage. It can also be casted while Stealthed.

Always look to use this ability on more than 1 enemy if possible. It has a fairly long range, so you can move closer to another enemy to land it on multiple targets.

Can be used to slow melee enemies or peel your healer/ranged teammate as they try to move away from them. It also works through objects, so look to hit enemies through if they are playing defensive.

If you’ve ever played World of Warcraft arena, you know how crucial shadowstep is for rogues. Shadow Walk works in the same way, causing you to teleport behind an enemy OR an ally, shortly increasing your movement speed.

This ability is very flexible, allowing you to use it for offensive or defensive purposes.

You can use it to gapclose to the target you’re trying to kill, or you may find that you want to stun the healer while you’re killing someone else. Look to Shadow Walk on an off-target and stun him while you kill someone else.

Poison attack. It’s a dot and a healing effectiveness reduction ability. Use it on the target you’re trying to kill as heals are coming in.

You want to try and time its uptime with the enemy healers cast, effectively reducing the incoming healing on the target.

Your main defensive ability. Removes all debuffs on you and reduces damage taken by alot. Use it to break CC, avoid incoming damage or to be able to stealth away.

It’s a 30 second cooldown, so you want to be careful about using this. Good players will know how to play around it if you aren’t thinking about the way you use it.

Try to coordinate when to use this with your healer, so you don’t overlap defensive CDs.

Standard DOT build. You want as much uptime with Envenom, Whirling Knives and Puncture as possible. Spread to multiple targets if you are free and have spare combo points. Set up kills with your Daze ability, either using it on the main target or an off-target like a healer.

Shadow Walk and Shroud are your defensives. Try not to be greedy with their use, so you don’t make yourself too vulnerable. You can use objects to LoS around while your DOTs are ticking, or if you’re waiting for CDs to come back up.

Second puncture should be used on another target if the first one is still running. If you have alot of pressure, try to use the second 5 CP you get in a Daze attack on the enemy healer.

Look to set up big go’s on a target with your Daze and the Wizards burst abilities. Ideally you want to do this on every Daze attack (Every 20 seconds). This comp can be hard to play, and it will come down to how well you coordinate damage with your wizard. There are some variations where you have more burst and less DoT damage that might work better with a Wizard.

Spread Dots with the Lich on multiple targets. Look to see what enemy becomes vulnerable as the game goes on. Try to force Cds with your Daze and Annihilate bursts while maintaining as much uptime on your Dots as possible.

Double melee composition. Focus 1 target or split pressure on multiple targets. Coordinate interrupts and stuns with your warrior to burst someone down or force an important defensive CD.

Strength and Agility provides power. Agility also gives you armor and crit, which are two other important stats to have as an assassin.

Crit is a nice to have as you’re going to be using annihilate alot. More annihilate damage means more pressure.

Magic Resist is good to have in the games current state. As an assassin you’re going to be in the open alot, and with so many magic damage dealers around this stat can help you sustain yourself and increase your ability to pressure over time.

Lifesteal also increases your sustain but its effectiveness depends on your damage uptime.

Our New Player Guide can be found here