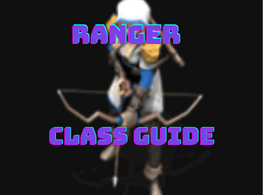 The Ranger is a ranged, bow and arrow shooting class with great shutdown potential, decent damage output and a straight-forward playstyle.

If you’re a player who likes ranged damage, or perhaps you had a strong interest in the hunter class in World of Warcraft, then the Ranger in Arena of Kings might be for you.

Before diving into our Ranger Class Guide, you can also check out our updated Aok Tier List here to see how the Ranger does against other classes.

This ability is excellent for following up on stuns or other CC done by you or a teammate. It’s a flat damage ability but try to use it with every CC setup you have. This could be done with your Quicksand or Elemental Arrow ability

A hard-hitting arrow that applies Chill, freeze and burning at the same time.

This ability should always be in your build, as it’s both great for CC and damage. Usually you want to do it on the main target, but it can also be used to keep enemies off your teammates or yourself should you need to run away

A 1 second immunity to everything when pressed. 20 second cooldown.

Important defensive CD that should always be in your build.

You can find the most value with this ability when using it to avoid big damage abilities such as Lingering Demise, Meteor, Nether Bolt etc. Try to be careful with your timing and not be greedy using this ability. Good enemies will see you using it and usually try to swap to you as you come out of the Vigor effect.

Solid damage ability that lets you do small bursts every 4 seconds. Follow up with an auto-attack quickly for added damage and to use the Pierce effect

Aether Shot is a mana-draining ability. This ability can be used in comps where your main objective is to make one of the enemy casters or healer out of mana. Usually best suited for longer games, and only really viable if you’re playing with another class that has a mana-draining spell. This could be a Nihilist (Siphon Mana) and a Mystic (Mana Tap).

Putting this one here as this one is extra important as a ranger. You want to be firing auto-attacks between every global or to regain energy.

When you aren’t firing abilities, press auto-attack. It doesn’t have to be on the main target if you can’t reach, but then at least hit whoever you can as you make your way over. In the games current state, Rangers need any extra damage they can get to create pressure.

One variation of a Ranger build. With this you get a mix of CC, burst and solid utility:

Some rangers like to use Rain of Arrows instead of Headshot or Nightmare Shot.

Vigor and Quicksand are your utility spells. Quicksand is especially good if you’re playing versus a double melee team where you have to be kiting alot, but this one can also be replaced for Silencing Shot or Rain of Arrows if you find yourself only facing the standard ranged/melee/healer comps

Every situation is different, but you could open with:

Both Elemental Arrow and Poisonous Shot are on longer cooldowns than Twisting Shot, so you can prioritize those.

Spam Twisting Shot > Auto on CD, and aim to get as many Autos in as possible between globals.

If your teammate snares or stuns in the beginning, start by using Rain of Arrows, otherwise save it. If you use Rain of Arrows on moving targets you’re just wasting globals.

This comp plays great into double melee compositions or any comp where you might find that you have to kite alot. Both Ranger and Wizard have snares, slows and stuns they can use to setup big bursts quite often.

None of you are mana reliant except healer, and with an Elder, you can usually sustain for a long time. Aim to play longer games if possible as the enemy team will usually have atleast 2 mana users.

Create space for your Elder so he can meditate. This is usually done by playing near objects that are placed around the middle of a map.

DPS Paladins biggest weakness is how easy he can get kited since he has no gapclosers. As a ranger you make up for that, helping him connect to targets. With a Paladin you also get a big defensive CD (Bubble) to help out your entire team.

This comp is good for sustained damage.

Power adds raw damage to your Autos and abilities. Since Rangers have high uptime on their damage, you want to stack as much as you can

Agility provides power. Agility also gives you armor and crit, which are two other important stats to have

Crit is great for a Ranger, as most of your spells can crit. More crit means more pressure.

Magic Resist can also be useful. As a Ranger you’ll be trading with alot of casters, and having Magic Resist for those trades can be an advantage for you and your healer; resulting in less mana used for your healer, and less damage on you when you’re standing in the open trying to hit someone.