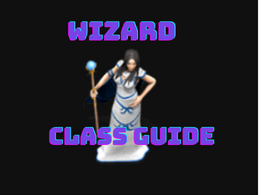 Similar to the mage class in World Of Warcraft, wizard gameplay in Arena of Kings is mostly about setting up kills and collapsing on someone with huge amounts of burst damage.

The wizard has high burst potential, excellent crowd control capabilities and solid utility options. This makes the wizard a valuable part of any team.

Terminology used in this guide

Hardcast = Spells that have a cast time and aren’t instant

There are currently two paths you can take as a wizard, one being fire and the other being frost. Both builds are viable, depending on your playstyle and the team composition you play.

Fire is generally regarded as having higher burst damage, but with frost, you get more CC and shorter intervals between bursts. More on that later.

One variation of fire. Your main damage source is fireball, with Aganoths Descend and Meteor used for added burst.

To peel and setup kills for your team, you have Flash Freeze and Sheepify.

For utility, you have Chilling Armor, Teleport and Crystallize.

Usually people will try to LoS you. In that case hit whoever you can with fireball and follow up with Aganoths Descend when possible for added pressure. Do meteor on tight spots or to hit enemies hiding behind objects.

Meteor combo: Although you see many mages around lower rating who likes to Teleport in, Flash Freeze and Meteor ontop of the enemy team, this is usually a bad play once you get higher up the ladder because it makes you vulnerable to interrupts, AND your Teleport comes on CD. During the game, you can look to set up Flash Freeze into Meteor and Fireball spam for good burst.

Frostbolt and magic missiles is your friend. You want to chain them whenever your target is chilled or frozen for added damage. Use Ice Spikes for added burst on the target you’re trying to kill with your team.

Eye of the storm can be used ontop of stun or CC from yourself or your teammate. This spell is also a damage amplification

With champion on your team you get a good frontline. Use him to create space for yourself and your healer. Follow up with damage on stuns. Chain stuns and interrupts when trying to go for kills. Use your utility to peel for your healer if he gets focused.

Assassin is another great class for setting up kills. Depending on the assassins build, you can have several interrupts and stuns to setup with meteor/eye of the storm/frost- or firebolt spam.

Try to burst either with meteor or frostbolt/magic missiles when the assassin stuns. If timed well you can 100 to 0 someone.

This composition is more focused on sustained damage. Try to chain Lich fears with your CC to keep someone out of the game. Spread damage and burst when going for kills.

With a mystic on your team you can get another ranged interrupt spell from his Astral Shock to shut someones casting down on the enemy team. Make sure to peel for both your teammates when they get focused.

Time your burst with the Nihilists’ Lingering Demise ability. This can make you seem unpredictable to the enemy team. The Nihilist can play Rockslide or Shatter Magic for added burst.

This composition deals well with melee classes. You’ll be able to kite and hit the melee without him being able to connect to your team. Make sure you stand apart and chain your utility stuff.

Wizard is a very versatile class and can be a good addition for almost any composition in the game.