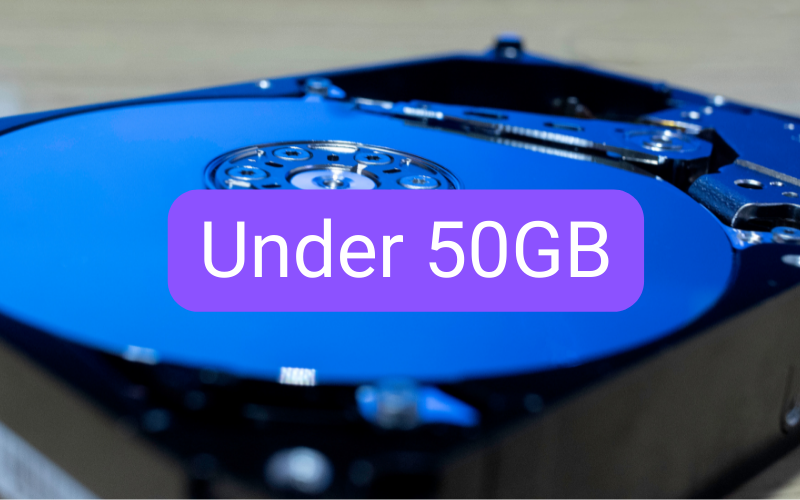 When talking about PC gaming, the majority of players want only one thing: the most visual experience imaginable. Why settle for console-level graphics when you can have 4K, realistic fog, and cloth mechanics? However, these hefty graphics come at the cost of your computer storage space.

Not to worry; we have created a list of the 9 best PC games under 50GB that you can enjoy just as much.

Borderlands 2 is a shooting video game released in 2012 by 2K Games and produced by Gearbox Software. The game is set five years after the events of Borderlands of 2009 and takes place on the planet of Pandora once more.

The plot follows a fresh set of Vault Hunters who collaborate with the Crimson Raiders, a rebel group consisting of victims and guerrilla warriors, to destroy Handsome Jack before he can uncover the power of a new Vault.

The entire game is about killing psychopaths and bandits, so guns are the most essential items to possess in Borderlands 2. This is the game for you if you’re seeking a game with a wide range of weaponry. There are so many guns in this game that you’ll be continuously changing your weapon because you’ll get a better one on every level.

Outriders game incorporates role-playing game features. Players build their own characters at the start of the game and pick from four classes, each of which has its own set of skills that can be used by the players.

All the special abilities to manipulate time, fire, and unleash strikes have a short cool-down time and can be paired with other abilities to get the most out of them. The game has a talent tree that allows players to discover and upgrade their features.

Botanicula is a humorous adventure game made by Amanita Design, the studio behind the award-winning Samorost games, with Czech band DVA.

Five little tree animals set out on a trip to prevent the last seedling from their home tree, which is afflicted with evil parasites, from being eaten by evil parasites.

Hardcore players, their partners, families, and the elderly, all will enjoy this relaxing game. There are almost 150 detailed destinations to discover and hundreds of hilarious animations.

As you struggle for survival, money, and glory, the entire world is in your hands. Players can explore through dense tunnels to look for gold and raw materials to build gear, aesthetics, and technology. They can also test their battle skills with ever-greater adversaries. The players can choose to develop their own city to house all the companions they meet on the way.

Terraria is a distinct game that includes the elements of action and creativity to entice hardcore gaming players.

WWE 2K20 is a game by Visual Concepts and 2K Sports that revolves around the theme of the professional wrestling game. The game is specially designed for Microsoft Windows, Xbox One, and Play Station 4 on October 22, 2019.  It is the 21st game in the WWE franchise, the and the follow-up to WWE 2K19.

The Showcase mode of the game is centered on the WWE’s Four Horsewomen. The game is loaded with 15 matches in which the players can take control of different models.

Death Stranding is set in the United States following a cataclysmic disaster that allowed destructive animals to wander the Earth. The player will control a character called Sam Porter Bridges who is a trusted courier boy that brings supplies to faraway lands and reunites them through a wireless network.

Death Road to Canada is an adventurous video game that takes you through the roads of Canada. As you journey from Florida to Ontario,  you guide a group of survivors in decision-making experiences.

Traveling, sneaking around, and battling in completely random cities and other locales are all part of the game. Find survivors, scrounge for resources, and deal with large swarms of classic-style zombies in this game.

FIFA 19 is a fun and addictive football simulation computer game. In many aspects, the game resembles real-life FIFA. The game provides exciting multiplayer options in addition to the standard games. Taking into account the problems with the previous series, the creators have enhanced various areas of the game while also improving its overall appearance.

Size of the game: About 1 GB

Warcraft 3 is a visually breathtaking remake of the pioneering real-time technique game that lay the groundwork for Azeroth’s most revolutionary tales. It’s a real remake, with a completely new look, a suite of modern social and matchmaking functions, and more.

If you ask us, the best PC games under 50 GB are Outriders and Death Stranding because of their graphical visuals. Here are some of the top features of both the games that make them the best:

When you have so many options, it can be difficult to select which game to play, but ultimately, your taste will determine what you love to play. We have provided you with the best options of PC games under 50 GB and you can play them all and choose the one you love the most.