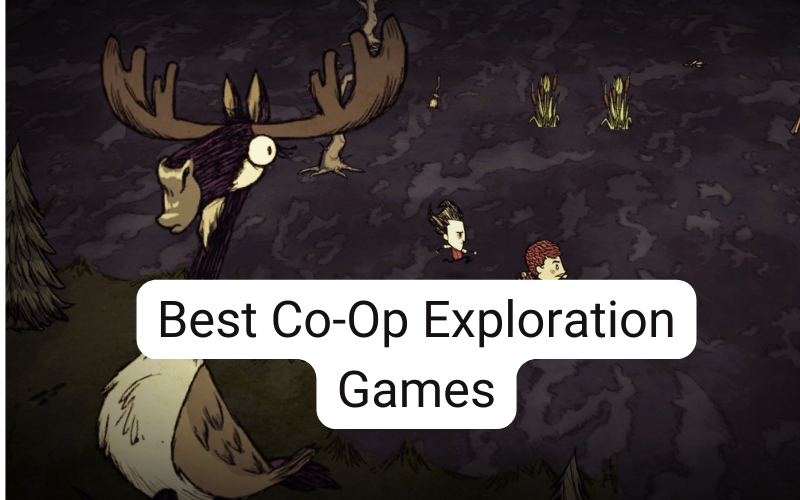 When it comes to video games, there is no shortage of titles that allow players to explore virtual worlds on their own.

However, some of the most memorable gaming experiences come from exploring those worlds with a friend.

Cooperative or “co-op” games have become increasingly popular in recent years, and there are plenty of great titles to play in 2022.

The 6 Best Co-op Exploration Games in our opinion, and in no particular order:

The game is an expansion pack to the original Don’t Starve released in 2013. In the game, players control one of several characters in a randomly generated world. The objective of the game is to survive for as long as possible.

Players must gather food and resources, build shelter, and fend off attacking mobs. The game features permadeath, meaning that if a player dies, they cannot be revived. Don’t Starve Together also introduces new gameplay mechanics, such as crafting and farming.

This game can be played solo or in groups of four. This open world game is incredibly fun to explore and play with friends.

The game is set in the Warhammer Fantasy universe. The player takes control of one of five heroes, each with their own distinct playstyle.

The game features both melee and ranged combat, and the player can use firearms, bombs, daggers, and swords to defeat enemies.

The player can also use environmental objects to their advantage, such as using oil barrels to explode groups of enemies. Vermintide 2 is a challenging game that requires teamwork and communication in order to succeed.

However, it is also an immensely rewarding experience, as the player progresses through the game they will unlock new weapons and skills.

There’s plenty to explore with friends as you traverse these open-world style levels in an arcade-style combat game that has endless replay value.

In Destiny 2, players take on the role of a Guardian, a powerful warrior who has been reborn to defend the last safe city on Earth.

Guardians are able to wield a variety of weapons and abilities, which they can use to battle the game’s many enemies.

The game’s primary mode is played online, and it features a number of different multiplayer modes, including cooperative and competitive play.

Destiny 2 also features an extensive story campaign, in which players must work together to uncover the mysteries of the game’s universe.

Ultimately, Destiny 2 is a deeply replayable game that offers something for everyone. Whether you’re looking for intense competition, cooperative playable moments, or simply a huge and engrossing universe to explore, Destiny will deliver again and again.

In Sea of Thieves, players take on the role of pirates sailing the seas in search of treasure. The game is set in a shared world, and players can encounter other players as they explore the various islands and reefs.

The game progresses through a series of quests, tasks and challenges, and players can earn rewards for completing them.

There is also a crafting system that allows players to create new items and equipment. Overall, sea of thieves is a fun and action-packed game that offers a unique pirate experience.

Combat occurs when players encounter other players or hostile creatures, and players will need to use their weapons and abilities to defeat their enemies.

In Minecraft, players can explore a vast open world and mine various resources to craft tools, build structures, and more.

There is no specific goal or ending to the game, allowing players to create their own objectives and objectives.

However, there are a few gameplay modes that players can choose from, including survival mode, creative mode, and adventure mode.

In survival mode, players must gather resources and build shelter in order to survive against the many dangers of the world, such as hostile mobs and environmental hazards.

Creative mode removes all of these dangers and gives players unlimited resources to build whatever they can imagine.

Adventure mode puts players in a specific map with custom rules and objectives set by the map’s creator.

In Deep Rock Galactic, players take on the role of space miners who are sent to extract valuable resources from hostile alien worlds.

The game features a large variety of procedurally-generated environments, and players must work together to overcome challenges such as cave-ins and hazardous conditions.

Teamwork is essential in Deep Rock Galactic, as players must make use of each other’s unique abilities in order to progress.

The game also features a wide range of customizable equipment, which allows players to tailor their loadouts to their own playstyles.

Deep Rock Galactic is an enjoyable and challenging game that encourages cooperation and exploration.

If you’re in the market for some co-op video games to play with your friends, we’ve got six great suggestions for you.

These games are all sure to provide plenty of hours of fun and laughter for everyone involved.

So what are you waiting for? Pick up a copy today and get ready to have some amazing co-op gaming experiences.