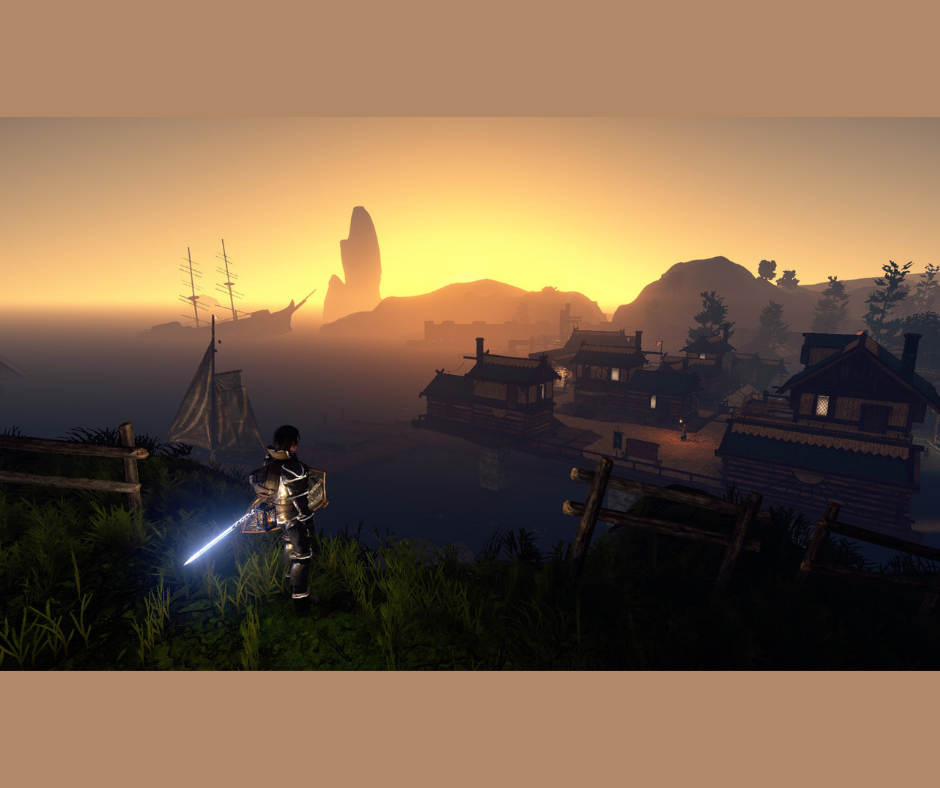 Do you find yourself wishing for more opportunities to delve into fantastical worlds and battle fierce monsters?

If so, you’re in luck – there are plenty of great fantasy RPGs waiting for you to explore, just like Outward

Outward is an open-world fantasy RPG that emphasizes exploration and survival.

Unlike many RPGs, which focus on combat and loot, Outward encourages players to take their time and immerse themselves in the game world.

If you are looking for an RPG that is different from the norm, then you should definitely check out these seven fantasy RPG games that are similar to Outward. You won’t be disappointed.

In Monster Hunter: World, players take on the role of a Hunter, tasked with tracking down and slaying ferocious beasts in a variety of large, open-world environments.

In order to succeed in these dangerous pursuits, hunters must craft powerful weapons and armor from the materials they scavenge from fallen monsters.

The game features a robust online multiplayer mode, allowing players to team up with friends to take on the most challenging content.

Monster Hunter: World is a visually stunning action-RPG that boasts hours of exciting gameplay. Whether you’re playing solo or teaming up with friends, there’s always something new to discover in this massive open-world game.

Lord of the Rings: War in the North

Lord of the Rings – War in the North is a video game set in the world of J.R.R. Tolkien’s Lord of the Rings. The game follows the story of three heroes – Farin, Eradan, and Andriel – as they journey to the north of Middle-earth to battle Sauron’s forces.

Along the way, they are joined by other notable characters from the books, such as Gandalf and Aragorn. The game features an open-world environment that allows players to explore various regions of Middle-earth, including Eriador, Rhovanion, and Mordor.

Dark Souls 2 is a role-playing game that was released in 2014. The game is set in the kingdom of Drangleic, and players take on the role of a protagonist who is seeking to find a cure for their curse.

The game features an open-world environment, and players are able to explore different areas and encounter various enemies.

The game is known for its challenging gameplay, and players must carefully manage their stamina and health as they battle through hordes of enemies.

Dark Souls 2 also features an online multiplayer mode, which allows players to cooperate or compete with each other. Overall, Dark Souls 2 is a challenging and rewarding game that offers hours of entertainment.

Sword and Stone is a fantasy RPG game that immerses players in a world of magic and adventure.

The game is set in the fictional kingdom of Alderstone, and players take on the role of brave heroes who must defeat the evil forces that threaten the land.

Sword and Stone features an extensive questing system, allowing players to explore the world and uncover its many secrets.

The game also features a robust combat system, allowing players to customize their characters and build their skills as they progress through the game.

With its many different gameplay elements, Sword and Stone offers players an enjoyable and challenging gaming experience.

Risen is an action role-playing video game that was released in 2009.

The game is set in the fictional world of Rivellon, and follows the story of a nameless hero who is raised from the dead by a powerful witch.

The hero then embarks on a quest to uncover the truth about his own death, and to stop the witch from taking control of Rivellon.

Along the way, the hero will make allies and enemies, and will learn to use magic and weapons to defeat his foes.

Risen is a well-crafted game with an engaging story, and provides hours of entertainment for gamers of all ages.

Conan Exiles is an open-world survival game set in the brutal lands of Conan the Barbarian.

After being exiled from his home, the player must survive in a hostile world, building up their strength and power to eventually become an unstoppable force.

The player begins the game naked and unarmed, with only their wits to guide them. They must scavenge for food and water, build shelter, and craft weapons and armor to defend themselves against the many dangers that lurk in the world.

The game is incredibly challenging, but also rewards players who are able to overcome its obstacles. Those who persevere will find themselves becoming the ultimate barbarian warrior, capable of taking on anything that stands in their way.

Two Worlds 2 is a fantasy role-playing game that was released in 2011. The game takes place in the fictional world of Antaloor, which is divided into two warring factions: the orcs and the humans.

Players take on the role of a human hero who must team up with the orcish rebel leader to stop the Orcish Elder from enslaving the humans.

Along the way, players will explore a vast open world, complete quests, and do battle with a variety of enemies.

Two Worlds 2 is an action-packed RPG that features an intriguing story, exciting combat, and a large open world to explore.

These games are extremely popular, and for good reason. They offer an immersive experience that transports you to another world. In addition, they provide countless hours of entertainment. If you’re not sure where to start, try the games already mentioned. You won’t be disappointed.