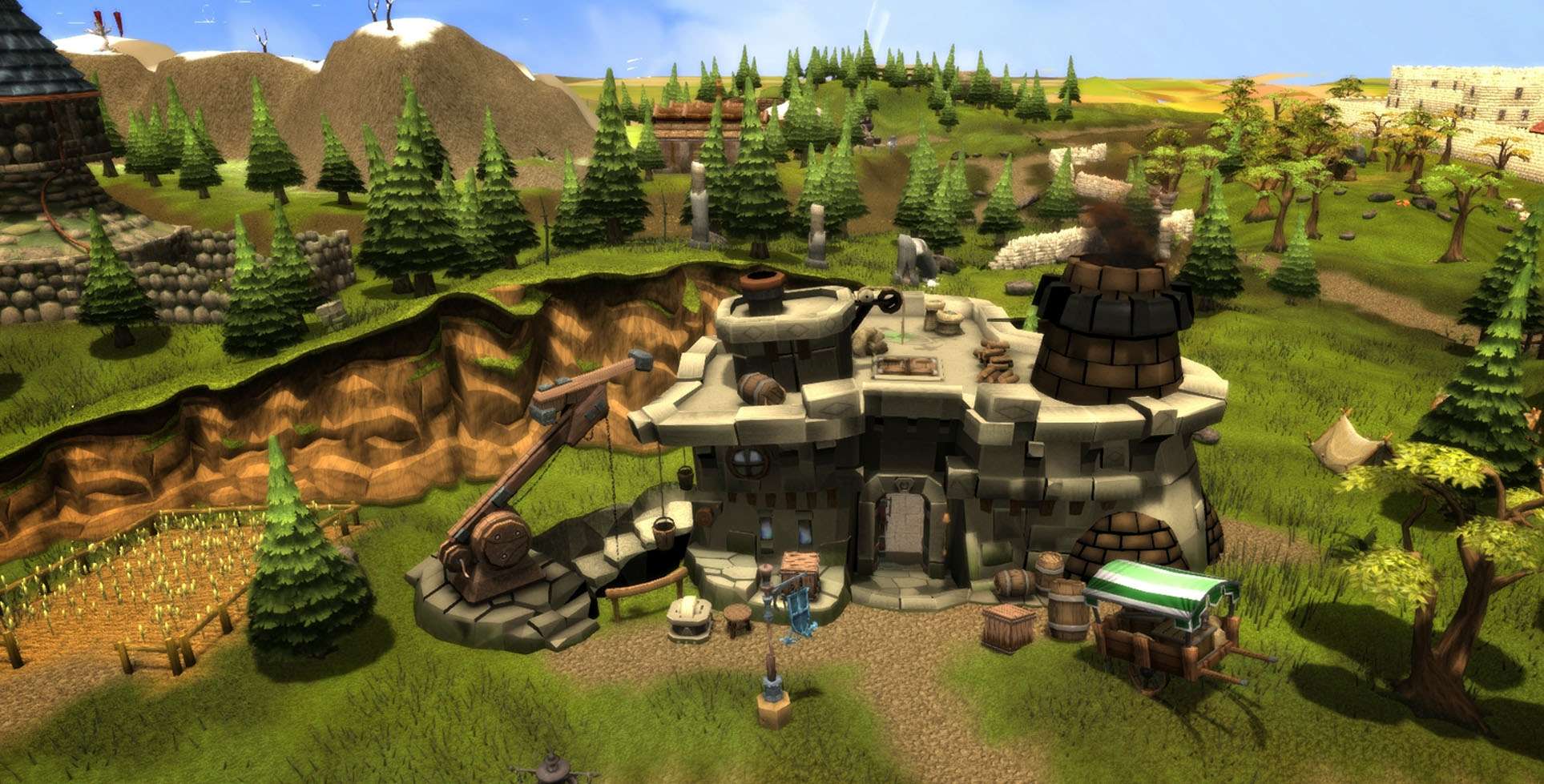 In 2001, Runescape was released to the public by game company Jagex. A role-playing video game that revolutionized the gaming world and went on to become one of the world’s most famous

Players can acquire more raw materials or fighting techniques as their skills advance. With 26 skills in total, there are many different ways to play, and gamers have complete control over how they choose to play. There are no restrictions on the kind of character that players can create thanks to the classless skill system.

With that in mind, let’s have a look at the factors we’ve used in this guide to decide on alternatives to Runescape. Every game on this list resembles Runescape on one or more parameters, such as:

In the game Re: Imagine, you seize ownership of a Demon Buster, a character committed to thwarting evildoers and ensuring that humanity is at least partly secure on Earth’s surface. You can summon Demons using a wrist-mounted digital device after convincing them to fight their species through negotiations and contracts, which is more exciting than it seems.

A number of keys are used to control attacks and other powers, and everyone has a cooldown timer similar to Runescape. You and your Demon gain experience independently, collecting experience points for every enemy you beat and task you accomplish. Like Runescape, Re:Imagine comes with a classless system and your success is largely based on the skills you choose, giving players alot of customization.

One of Nexon’s most well-known classic MMORPGs, Mabinogi, has endured the test of time because of its open-world architecture, which crams flexibility and customization inside a traditional MMO structure. A century-old struggle that plagues the terrain and threatens to completely destabilize the gaming world is set in the mythological, anime-inspired world of Erinn.

The Rebirth System, which makes sure that players can always access content, and a multitude of available skills – activities like archery, music composition, and clothing customizing is what gives Mabinogi its depth. With a vast variety of options that go beyond the typical MMO experience, this strategy game provides unlimited choices to its players.

As you might expect, the Mabinogi gameplay experience is powered by the player-driven economy of the game. A blacksmith or dressmaker can create the armor and weaponry that fighters require. Hunters and gatherers supply the raw resources that blacksmiths and tailors require to manufacture their crafts. It’s a complex ecology that rewards grinding and character growth in a way that seems rational, natural, and enjoyable.

We advise you to check out Valheim if you’re looking for something that isn’t an MMO or ARPG.  Runescape and Valheim have a lot in common when you look past the genre differences.

Runescape and other early 2000s MMOs come to mind, as does the experience system, which gradually pays you for tasks like mining and logging. The environment also has a new sense of independence and openness. Visit our list of games like Valheim here

Albion Online is an epic fantasy MMORPG with thrilling and adventurous gameplay. One of the rare games that allow players to choose what they wish to accomplish and who they want to be in this adventure with. In Albion, all the gear and goods are player-made, and people are free to make, trade, gather, and cooperate anywhere in the open-world area.

The classless system of Albion is a significant similarity to Runescape. Instead of classes, you employ the abilities of the weapons you are donning. The “Destiny Board” feature is additionally introduced in the game. You can gain, renown, or use “Learning Points” to acquire new skills. Additionally, it displays the tasks required to unlock talents.

The game primarily depends on cooperative play in order to obtain resources for further crafting. Guilds can also establish guild halls, private hideouts, and other structures on claimed land.

Legends of IdleOn is an idle game with MMO components that was highly influenced by Runescape and Maplestory. The game is currently being developed and is constantly adding new content (Good thing for us regular gamers)

Many old-school RuneScape gamers have fallen in love with Black Desert Online, a relatively new MMORPG. It provides something new and different that demands more than just the appropriate skills to destroy adversaries if fighting is not your thing in Runescape.  Black Desert Online differs from the rules of MMORPGs in a number of ways to offer a distinctive experience, including infrastructure development and a day/night cycle.

Your decisions will determine the fate of your country in this stunning sandbox MMO, which puts you on the path to conflict. The enigmatic Black Stones, which were discovered between the two nations, have become the main point of conflict between the two main factions.

You can select from a large variety of classes, combining the agility and cunning of a Ninja with the unbridled strength of a Dark Knight. As your enigmatic friend tries to lead you through this dangerous wasteland, you also get a chance to learn about the world lore.

Players return to Tyria more than 200 years after the events of the original game. Guild Wars 2, which is set in a fantasy-style environment, is a simmering stew of lore and hardship for players as various circumstances reach a climax, including the waning force of the human race.

Players will also discover a dynamic storyline that is sensitive to player actions giving the weight of your selections, along with several high-quality standard MMO mechanics. Guild Wars 2 is an MMO with a focus on delivering complexity thanks to its intricate combat system, which pushes players to think about character combinations that work well together.

Leaving that aside, Guild Wars 2 also features a ton of content that makes every penny you paid on the game more than pay for itself. You receive updates for free in addition to immensely addicting gameplay in which combat is action-based and conflicts are influenced by unique, weapons and profession-based skills structure.

With its first release in 1997, Tibia can boast of being one of the MMO genre’s earliest games. Tibia has retained a significant player community decades after its introduction, despite the fact that newer MMOs have much better graphics and QOL improvements. Tibia is an MMO that focuses on bringing players through a fantastical world as they level up, gain experience, and learn new skills.

Players will establish their own end objective with an open fantasy realm to explore as one of the game’s four professions, supported by numerous sandbox mechanisms. Whether it’s creating the ideal character, completing all tasks, discovering every nook and cranny of the game, facing and eliminating every enemy, or managing the economy with hidden objects.

Tibia is an MMO that offers a rigorous experience for those who want it, with a heavy penalty of death and a focus on PvP on select servers.

RPG MO is an intriguing multiplayer game where you defeat enemies and level up in 18 various talents. Players can develop fighting and magical abilities, buy armor, weapons, and new spells to become fierce combatants. They can also develop their crafting abilities to make things for themselves or to sell to others in the player-driven economy.

The game is an open-world sandbox adventure where players can select their own path. A critical player market where any item may be sold to other players is a fundamental component of the gameplay. It is a real free-to-play game; you may use in-game cash that you earn through gameplay to buy things from other players, including the most sought-after items.

RPG MO was designed for the tryhard gamer crowd, and you might find that it feels very grindy, if this is your thing. Casual players might also like the gameplay, especially if they’re ready to practice and have patience.

In the post-apocalyptic fantasy future of Damascus, civilization has devolved into a medieval condition as a result of the devastation of the past. In this reality, a great number of creatures have evolved into sentient beings, giving rise to numerous races. Humans have evolved psychic skills that they can utilize to create fire or teleport to new places, among many other powers.  The player can sacrifice goods to these beings in order to obtain powerful boons from them.

Explore the bizarre and amazing world that is before you by creating a unique character. Improve any one of your 19 skills. Talk and exchange goods with other players. Make new pals and defeat various dragons in this fun game!

The main objective of Minecraft is to let the player explore, connect with, and alter a dynamically created map consisting of blocks that are one cubic meter in size. The environment contains blocks as well as things, mobs, and plants. Among the game’s activities are ore mining, combating aggressive creatures, and creating new structures and tools by collecting various in-game resources.

The successful web MMORPG Runescape served as the inspiration for the Minecraft server called Minescape.  Although Minescape is inspired by Runescape, it differs from that game in numerous ways, including new talents, boss creatures, missions, and items. Along with a plethora of other game modes, Minescape is a game mode that is free to play.

The first-person viewpoint with your character and more engaging interaction with the world is what Minescape offers above ordinary Runescape. In Minescape, there are now 23 different skills that are focused on collection, crafting, battle, and exploration.