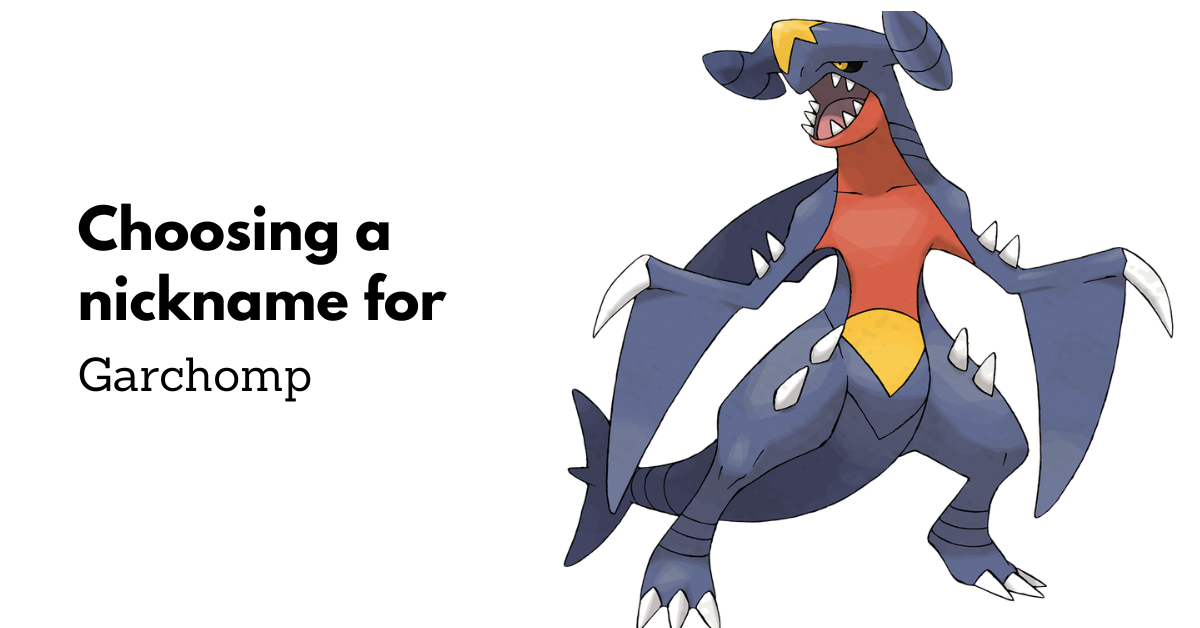 So you’ve managed to find a Gible and evolved it to Garchomp, and now you want to give your new Pokémon a suitable nickname?

To get started, we first need to look at where the Garchomp name originated from, and how we can use this information to choose and style our own Garchomp nickname

According to Bulbapedia, there seems to be some speculation about the origin of the Garchomp name. There are several logical name theories, such as a combination of the word Carcharias (a genus of sand tiger sharks), Chomp and possibly Gargoyle or Gargantuan

By looking at the Garchomp’s physical appearance, you can see that it has defining traits from a wyvern, various sharks (specifically the hammerhead), and dinosaurs. These traits can help us understand why and where the idea of the Garchomp name originated from.

Keep the above in mind for the next chapter

When choosing the best Garchomp nickname, these are the things you want to keep in mind

With that in mind, here’s our favorite Garchomp nicknames for you to choose from

Best Garchomp Nicknames according to Tumblr

According to Tumblr, these are the most popular user-picked nicknames for Garchomp

According to Reddit, these are the best and most upvoted user-picked nicknames for Garchomp (Not gender-specific)

If you’ve managed to evolve your Gible into a Male Garchomp, then these are the best nicknames we recommend

When choosing a unique and original name for your Garchomp, you need to come up with something that hasn’t been invented before. This can be very tricky, since there are so many Pokémon players who’ve already nicknamed their Garchomp.

However, there are some things you can think of when trying to come up with your own unique Garchomp nickname:

If I wanted to make examples based on myself and the above things, then my unique Garchomp nickname could be

When trying to come up with a creative name for your Garchomp, there’s some specific things you can consider: