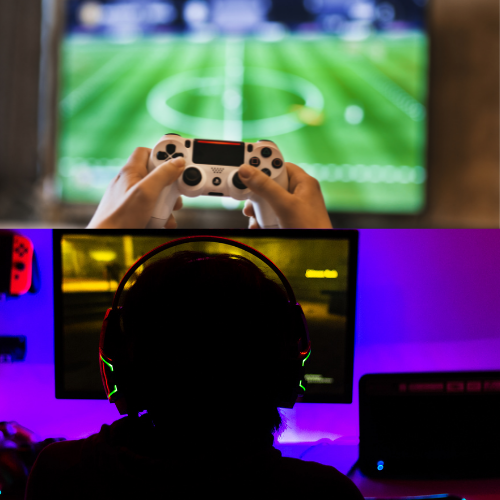 Those are the most popular gaming devices today, amassing hundreds of millions of daily players from all over the world

Today, some of the most popular games such as Fortnite and FIFA, are playable on both PC and Console, and you can often find Console and PC players in the same multiplayer games, playing against eachother

This begs the question:

Is PC Easier Than Console?

For this particular question we’re only gonna discuss FPS games. It’s important to note that the answer can vary from individual titles

Mouse and Keyboard is the standard gaming option for PC gamers.

A keyboard has a total of 104 buttons, although you probably only use around 20 or less of those in FPS gaming.

A mouse is directed through the wrist and elbow, and your ingame performance depends heavily on your ability to react fast and precisely with it

Playstation and Xbox uses a game controller – a handheld device

A Playstation controller has 13 different buttons and two analog sticks

They are both connected to a monitor through the device

A PC Keyboard has alot more button combinations than a Console controller.

A Console controller can have much longer sequences of button combinations because of the fewer buttons. You rarely see this on PC

On PC, the aim is directed through the mouse with your wrist and elbow

On Console, the aim is directed through the thumb on the analog sticks, and there’s less room to move around.

Answer: No. In general PC gaming is harder than console, but console is harder to play for casual gamers. This is because PC gaming has more complexity, individual customization and a higher skill-cap for Pro gamers.