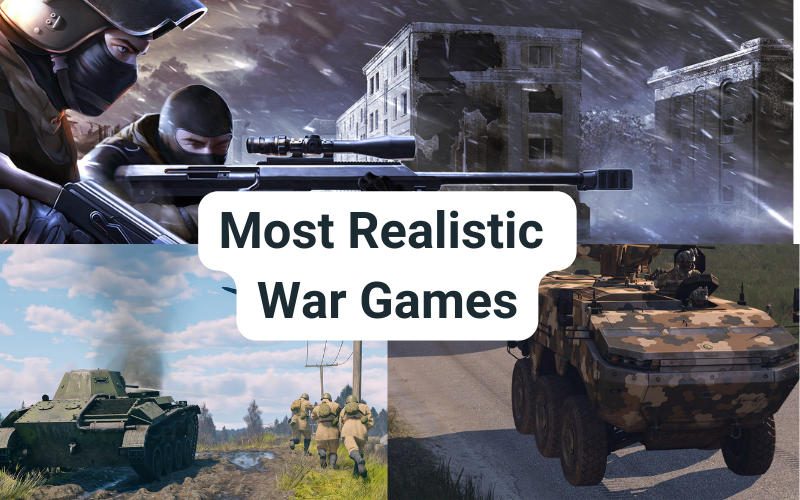 Military war gamers are appealing to most gamers today, and are also available on many different gaming platforms.

With the steady release of games each year, picking out a few off the list can be challenging, especially if you’re looking for a special genre like realistic military and war games.

War games also enable the gamers to be on their best game, especially when it comes to showcasing sharper reflexes and superior skills. There’s also usually a big strategy element to these sort of games.

In addition to the above, the majority of realistic war games feature very appealing graphics and appearance in their layout, which is another reason why they have gained so much popularity among gamers.

Our List of the Most Realistic War Games for PS4

As we said, realistic war games are released in abundance every year. However, you need to realize that not every game is worth the hype and the time that you spare.

So, let us walk you through the list of the best options you can consider playing today

Set across the backdrop of World War II, Hell Let Loose is one that you won’t regret playing. The game takes the players across different iconic battles that were fought in history.

However, you do have to play as a soldier helping your squad out in the battle towards victory.

The game isn’t your staple shootout game, but involves a lot of planning, strategizing and open communication with your squad members. It is a team-focused game, so when you are playing it on the PS4, you’d have to discuss it at length with your team members before you make the next move on the battlefield.

When it comes to realistic war games, Arma 3 doesn’t require an introduction. The game has been around for close to 3 years and has been a popular hit among PS4 players.

The military sandbox-style game is one of a kind, filled with unexpected twists and requires team strategizing every step of the way.

The game features multiplayer game modes and has a military simulator game layout, something that will take you off different scenarios.

It is with no doubt that the game is quite a popular one. But, the fans are still waiting for a successor or the next version.

With the game’s new instalment released in 2021, Sniper: Ghost Warrior Contracts 2 lives up to its reputation from the past. The game is based around the Middle East this time around and you still have to be on the top of your game to battle out the enemies and overcome the war.

The game has missions, so you have to plan the way you move ahead with the objectives. There are ways in which you can plan to take down your enemy without a bang or create chaos in the long run with proper strategies.

Last on the list of realistic war games worth considering is Enlisted. Like Hell Let Loose, even this game is based around the backdrop of World War II.

There are different missions and modes to essential take over the fun and the thrill of the game.

The battle is panned out across four different regions, involving a different range of vehicles and exercising control during the game.

How many of these realistic war games for PS4 did you know about?