The Origin of Roblox 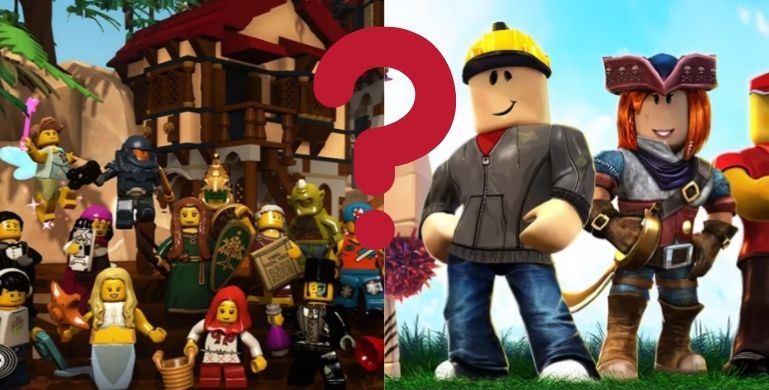 If you aren’t familiar with the game however, Roblox is an online game intended for children that bears more than a passing resemblance to another hugely popular IP for children, that being Lego.

It begs the question, is Roblox inspired by Lego? Visually there are some undeniable similarities between the two properties, especially in terms of how Lego figures tend to look very similar to Roblox’s titular playable characters, the Robloxians. We’ve dug deep to find out the truth, and the answer may surprise you!

Is Roblox Based on Lego?

To answer this question, we’ve got to go back to the conception of Roblox. Despite its sudden explosion of popularity in recent years, Roblox has actually been available on PC since 2006, being independently developed. The advent of mobile versions of the game is what has led to its recent uptick in attention, opening it up to a whole new generation of young gamers.

Unsurprisingly, during the game’s development it was often compared to Lego, with many calling it a “Lego-clone MMO,” though the term never came to stick. Rumors claim that the Roblox developers actually approached Lego, hoping to sell the game to the toy company and market it as a full-on Lego game, though Lego declined as they had their own MMO, LEGO Universe, in the works.

Since then, Roblox has managed to slowly but surely garner more attention for itself. LEGO Universe on the other hand would officially launch in 2010, before eventually shutting down due to high maintenance costs. Outside of this, Roblox and Lego would see no form of crossover, with Roblox even redesigning their playable characters to be more distinct.

On top of this, Roblox themselves rarely make any comparisons between their product and the Lego company’s successful toy-line. The closest we’ve seen is Roblox company officials stating that their website receives more monthly views than the Lego website, which isn’t too surprising considering Roblox is an online game and therefore more likely to draw in regular clicks.

So to answer the question, it’s not exactly too off the cuff to say that Roblox was at least somewhat inspired by Lego, at least in terms of design.

However, the comparisons are rendered moot simply because Roblox is an online video game based around its robust physics engine, while Lego bricks are toys that are focused on pushing forward creativity within children.

What is Roblox Inspired By?

Now, if Lego isn’t the direct inspiration for Roblox, then what is it?

Surely, with the sheer amount of Lego clones on the market, one of them must have served as the main inspiration for the MMO juggernaut? Well, according to the co-founder and CEO of Roblox Corporation, David Baszucki, the inspiration wasn’t any form of toy at all.

Baszucki, known in the Roblox world as ‘builderman’, was inspired to make Roblox (known during early development as Dynablocks) by the success of his Interactive Physics and Working Model software applications.

“Interactive Physics” was an educational supplement that allowed the creation of 2D physics experiments, with “Working Model” being a follow up intended for mechanical design purposes.

Roblox was also built with the ability to let players create their own content thanks to its proprietary game engine, Roblox Studio.

A developer and programmer in his own right, Baszucki clearly saw the inherent value in allowing users to generate their own content, pushing players to learn programming and improve their skills while simultaneously enjoying the game.

It’s certainly an unexpected inspiration for such a plucky game based around blocks, though one that makes sense in the context of how the game functions. You’d be forgiven for not knowing, seeing how the game doesn’t flaunt this fact much.

The Future of Roblox?

With Roblox taking off like never before and even more people starting to pay attention to it, the game’s future looks brighter than ever.

The developers have been pushing forward to get more eyes on the game through virtual concerts, brand deals and promotions, and it’s been working very well.

Things are also looking up for those who make games within the Roblox engine. Children who grow up with the game and develop a keen interest for the programming side of things are reimbursed by the Roblox company, with some being able to finance their college tuitions through their Roblox profits alone.

Whatever may come, at least for now, Roblox is in absolutely no danger of becoming irrelevant. It boasts an even higher active player count than fellow gaming juggernaut Minecraft at 56 million monthly players, and those numbers aren’t going down any time soon.

If you’re a fan of Roblox, we hope you’ve managed to learn something from this write-up.

Roblox is an ever expanding game, and the community is what keeps it alive, so keep on playing and don’t forget to have fun doing it!